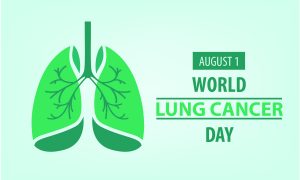 In the early 20th century lung cancer was a rare disease, but unfortunately, it is now one of the most common cancers found worldwide. Lung cancer has been estimated to account for nearly one in five deaths globally in both men and women. It has been known to claim more lives each year than breast, colon, and prostate cancers combined making it the number one cancer killer in the United States.

In 2012 there were 1.8 million diagnosed cases of lung cancer which is the reason “World Lung Cancer Day” was created. The significant day of awareness hopes to highlight issues that would help raise funding which could lead to more research to ultimately find a cure. Additionally, the campaign’s main purpose is to educate and inform the public on the causes and how to reduce one’s risk of getting the disease.

Although new research and treatments continue to surface, the survival rate is low. But the good news is that lung cancer is a preventable disease.

It is important to know that anyone can get lung cancer. The best way to minimize one’s risk is to know the factors that play a role in its development. The risk most are aware of is tobacco products and secondhand smoke. Although smoking is the single greatest risk factor, recent studies have shown that other risk factors include genetics and the environment.

The risk increases if there is a family history and/or a history of cancer in another part of the body. It has also been found that industrial products such as uranium, radiation, asbestos, air pollution, and even nutritional deficiencies can contribute to an increased risk of lung cancer because of long-term respiration of carcinogenic materials. Lung diseases like chronic obstructive pulmonary disease (COPD) and radiation of the chest area are also known contributors of lung cancer.

Some symptoms of lung cancer include difficulty breathing and/or swallowing, chest and/or back pain, and coughing up blood and/or mucus.

Early detection and treatment are vital and can result in a 20% reduction in lung cancer-related deaths. A new screening is available for those individuals at high risk for lung cancer. A person is considered high-risk if they are between the ages of 55-80 years old and have a 30 pack-year history of smoking, are a current smoker, or have quit within the last 15 years. The low-dose CT scan is highly recommended and can improve survival rates.

Interventional Pain Physicians of South Florida are here to make your healthcare journey simple and bring further awareness to the community. Contact us today to schedule a consultation.